The Charity’s honorary treasurer and honorary secretary have just returned from a private visit to Ethiopia and they naturally visited EWCV to see the achievements and challenges at the center for themselves. The centre is still recovering from the shock of the storms and floods in July 2017. The irony is that the rainfall after the freak weather was poor. What is more they have had some nights of hard frost which has made the recovery harder. Indeed the avocado saplings they planted in November with CultivAid’s drip irrigation system have been badly affected by the frost and Alem was saying that they might have to replace some of the plants. CultivAid from Israel is working in different parts of Ethiopia on hands on training in agricultural development emphasising “the need for agronomists to be in the field in order 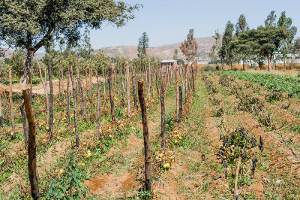 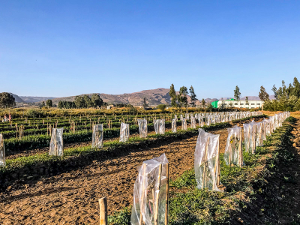 to support and guide farmers to achieve better agricultural practices, higher yields, greater income and better nutrition”. EWCV was apparently selected as a demonstration site for CultivAid by the Tigray Agricultural Research Institute and Tigray Bureau of Agriculture, and they have been getting visitors from centres as far away as Butajera in the south to see the demonstration. CultivAid has set up the demonstration plot with drip irrigation worked by a pump which is set up to work from solar panels (which they have set up), from mains electricity or from diesel. 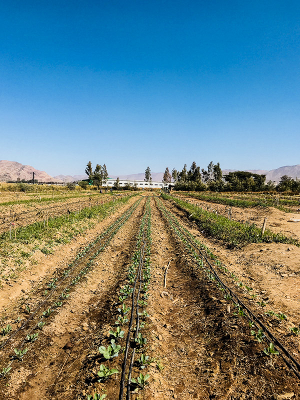 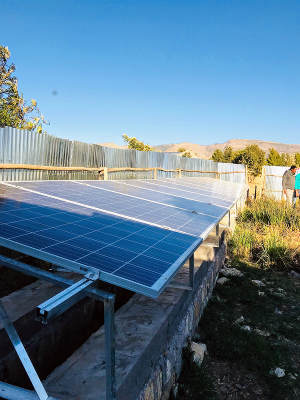 EWCV benefits from the infrastructure that has been laid down by CultivAid (for the centre to act as a suitable demonstration site) as well as the knowledge they have gained. However, EWCV have to meet all the associated costs. That is to say the costs of selected seeds and the saplings as well as the cost of labour and fertiliser to maintain the plants. And as some of the saplings may not produce fruit for a few years (four years in the case of avocado plants), this could be a drain on the Village’s finances in the “short time horizon” as they say in finance. We have asked Alem and Tesfai to workout the expected annual costs and share the information with their partners like EOS-UK and FECIN. 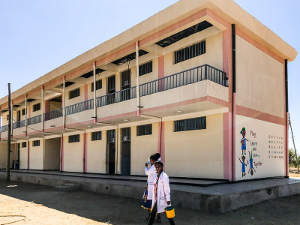 The Kindergarten extension (see photographs) was built by a grant from Elshadai  Relief and Development Association (ERDA), EWCV’s parent organisation. The furniture was paid for by FECIN with some contribution from EOS-UK and it looks good and robust (see photos). Unfortunately, the photographs were taken at a weekend and that is why no children are shown in the rooms. Normally, they have some 180 fee-paying kindergarten children from the community and they expect to have their full complement of 300 at the start of the next school year beginning in September 2018. The kindergarten is run as an income-generating venture for the Children’s Village while providing quality education to young children in a peaceful and safe environment. 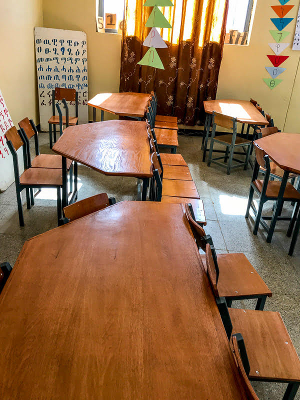 EWCV: furniture in new kindergarten extension paid for by FECIN with contribution from EOS-UK Charity Fund 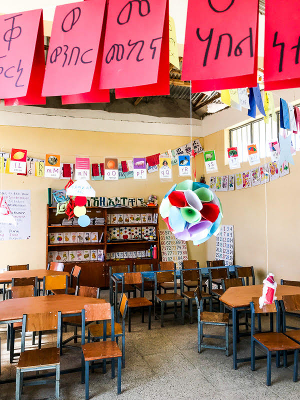 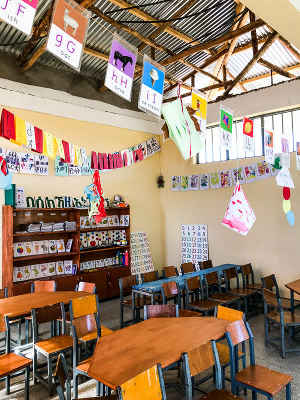 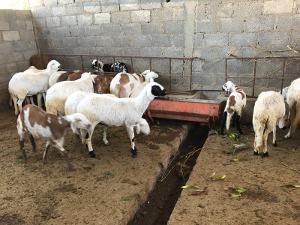 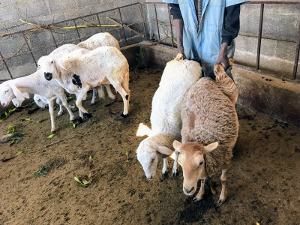 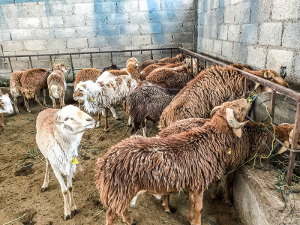 The cyclical sheep rearing programme was started in 2015 with financial assistance from FECIN. It is now a well-established project that has proven to be very successful. The sheep are sold three times a year to coincide with the main festive times: Ethiopian Christmas and Epiphany (Temket, ጥምቀት) in December and January; Easter in April; and Ethiopian New Year and Meskel in September. They don’t even need to take the animals to market: the workers at EWCV have priority (“as they don’t receive any other benefits”),  the sheep being sold at market value by weight. The rest are bought by parents of children who attend EWCV’s school and other friends/acquaintances of the Children’s Village.

Update on the bio-digester 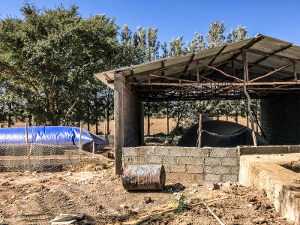 Blue bag filling up from bio-digester in the shed 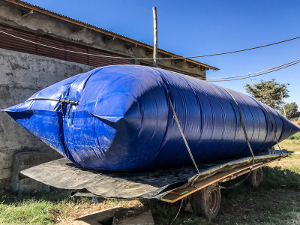 Bio-gas filled bag on an improvised trolley by the kitchen 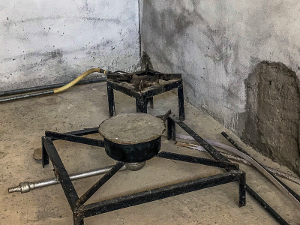 The biogester, funded by FECIN, was finally installed in June 2017 after a long wait and is already working very well. Indeed it is generating more bio-gas than they can use at the Children’s Village at the moment. The main reason is that nobody has yet developed an oven for baking injera (እንጀራ)that can run on gas. What they are currently using are electric ovens in which the heating elements are incorporated in the flat clay oven. Somebody has developed stove burners (see photos) that can be used for preparing the sauces (wot or tsebhi,ወጥ፣ጸብሒ) that go with the injera. But an engineering student can perhaps take up the development of a bio-gas-run oven as a college project. However, the problem may be is that there is no demand for a gas-operated injera ovens in Ethiopia at the moment.