Update on Elshadai Wukro Children’s Village (EWCV): One of our trustee members, Chris Cook paid a personal visit to EWCV in February with two of her friends, Sue and Helen, and was very pleased with what she saw. The children had never looked so well and she felt that the centre was generally better managed and run. The management at EWCV are more confident than ever at developing the centre to be more self-sufficient.

Out with the oxen-drawn plough, in with the tractor

There have been some positive developments that have increased the management’s optimism. One of the major developments has been introduction of mechanised farming in place of the age-old slow and laborious traditional oxen-drawn plough. 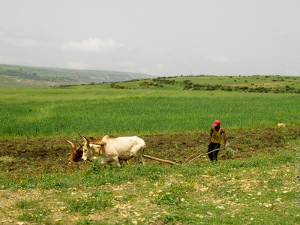 An example of the traditional oxen-drawn ploughing,
laborious for man and beasts

Tractor donated by EWCV's friends/partners in Switzerland
at work

A tractor was donated to EWCV in June 2015 by two of their friends/partners in Switzerland and they can now get two harvest of cereals a year from their farm besides their fruit and vegetables which are available throughout the year. There is, of course, the well publicised threat of draught which is again affecting a number of African countries, particularly in The Horn. So far the draught has not affected them badly at EWCV, but it is the normal dry season which means that they are dependent on irrigation from the ever-dwindling water of the nearby river and their two boreholes. They need water pumps for this, of course, and at least one of their two pumps is due for replacement. This is a substantial expenditure for which they are looking to funders and donors for support.

The second piece of good news is that SHARE, a medical charity based in Sheffield www.sharesheffield.org.uk, has formed a formal link with EWCV. Some of SHARE’s members have been individually associated with EWCV for the past past six years during their visits to Ayder hospital in Mekelle, particularly Jane Boyce who delivers basic dental treatment to some, and oral health education to all of the children in association with Ayder Hospital. Members have also taken in their luggage allowance donated clothing including over 300 summer school uniforms and 150 tops, and 50 pairs of shoes during their November 2016 visit.

Another development that has energised the management’s optimism at EWCV is a visit this year by Engineer Without Borders Israel. Working under the name ‘CultivAid, their objective is to trial many new varieties of vegetables and cereal crops and so hope to make the village’s farm an example of good practice using the most productive crops. The engineers have also cultivated previously uncultivated land and planted new fruiting trees.