January 2017: EOS-UK Charity Fund has transferred £4890.00 to its beneficiaries at Elshadai Wukro Children’s Village (EWCV) since it was founded six months ago in June 2016. The Charity was set up to try and mitigate the acute financial problem EWCV was facing. They are managing as best they can at the ‘village’ at present thanks to the income from their farm produce and the educational services they provide to the local community together with any help they receive from their friends and partners. 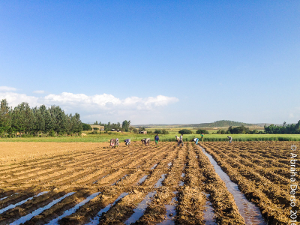 Sowing time at the "village"

They are currently responsible for about 33% of their annual budget from their own resources. Their kindergarten provision in particular is in great demand and they are expanding this service from September 2017 as a matter of priority as part of building their increasing self-sufficiency. Elshadai Relief and Development Agency (ERDA), EWCV’s parent organisation in Ethiopia, is helping them with the cost of the necessary infrastructure development (one block with three classes and lounge/cafeteria) for the expansion of the kindergarten.

Giving them fish and fishing rods

A field of wheat at the "village" farm

Supporting EWCV to develop their longterm self-sufficiency (or ‘giving them fishing rods’) is, of course, one of the main objects EOS-UK Charity Fund was founded for. However, the vulnerable children’s immediate welfare needs (‘giving them fish’) take priority at present. The Charity has, therefore, transferred to them the funds it received to-date both from its trusted regular sponsors and generous one-off/ad-hoc donors. The first transfer was a modest sum of £825.00 in September 2016, but the second transfer, which took place at the end of December, was £4065.00 making the total of £4890.00 quoted above. The latter sum was sent just in time for Ethiopian Christmas which falls on the 7th of January, and the money was very welcomed as they had, apparently, had a rather dismal time at Ethiopian Easter 2016 due to a shortage of funds. Easter is the biggest annual festival in the Ethiopian Christian calendar.

"...We are overjoyed to hear news of such vital and very timely support, and we thank you all from the bottom of our hearts for making this possible while EOS is indeed at its infancy".

(Quoted from a thank you letter from EWCV when the £4065.00 was transferred).

EOS-UK Charity Fund would like to thank all its supporter for enabling it to make a good start. It would like to pay special gratitude to John O’Donovan who raised £1000.00 in just six months when he learnt of the plight the children at EWCV were facing. John raises funds for charities by entertainment activities in his spare time.

The senior management at EWCV have had many agonising moments over the years over funding shortages. However, all visitors to the centre are struck by how truly happy the children look, always - a real credit to those who are caring for them.